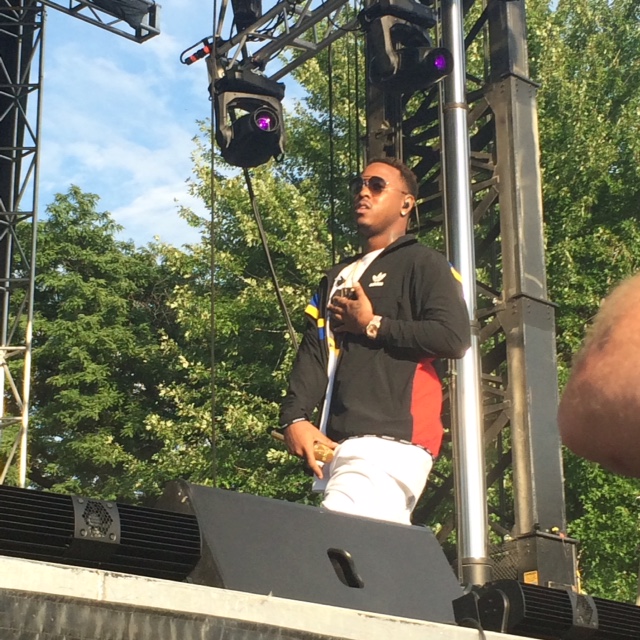 Last day of Pitchfork and tensions are high as we anticipate a thunderstorm. But really though is rain really gonna stop anyone from seeing┬áJeremih,┬áFKA Twigs, and┬áMiguel? Nah, doubt it. Lucky for us it was all clear skies as we hustle our way to the last few hours of Pitchfork.

Let’s get real here, dude only played like 3 songs. Maybe he was hyped for his birthday (which he mentioned several times) but my expectations were crushed after seeing his brief performance. With a late start, Jeremih let his DJ spin a few tracks while he roams around the stage announcing that he doesn’t have a official set list for us. We all knew at this point that shit was going to be messy but all settled on the same attitude -“fuck it, lets just hear ‘Birthday Sex’ and get the fuck out”. The only highlight of his show besides his piano rendition of “Birthday Sex” was Chance The Rapper’s appearance. Chance teases the crowd with favorites “Angels” and “No Problem” from his recent album Coloring Book┬áand left many people wondering (well mostly me) why he is still doing Chicago appearances after last year’s announcement that he was taking a break from his city. Meh, who knows. He saved Jeremih’s show so I’m grateful.

What a flirt. Dressed in white, my main mocha man excites the crowd with bedroom ballads and superb dance skills. And I say the word “superb” with confidence cause the man’s pants were tight and I mean really tight. I know it’s not easy to do splits and footwork when your whole lower body feels like its wrapped in saran wrap. Beyond his dancing and sensual vocals, Miguel made it a point to not only introduce himself to the crowd but was the first artist of the day to make a speech about “Black Lives Matter”. For the next few minutes of his set he speaks deeply about the issue and how we must live beyond the hype of social media and actually use our voices to make a difference. He proceeds to sing his new protest song, “How Many” which garnishes mixed reactions from the crowd.

For the last several years Pitchfork has closed out the show with a rap artist but this year changed up the game and brought on FKA Twigs. Many were surprised that she was closing down the festival but not as surprised when the crowd saw what she was cooking up. Backed up by dancers and intricate body paint, FKA Twigs ends the night with the most theatrical performance one can even describe. Unlike most artist, she can actually dance and I mean, the girl can fucking move. Rarely was there a dull moment as she utilized the entire stage to showcase her dance, vocals, and crystals (?) Nevertheless, FKA Twigs brings a nice art house dance feel to the murky ambiance of the night. The combination of her band, lyrical performance, and back up dancers closes out the event more sensual tone as we await next years line up.

Thanks again Pitchfork for this dope opportunity. In case y’all missed the entire festival, check out our full coverage: