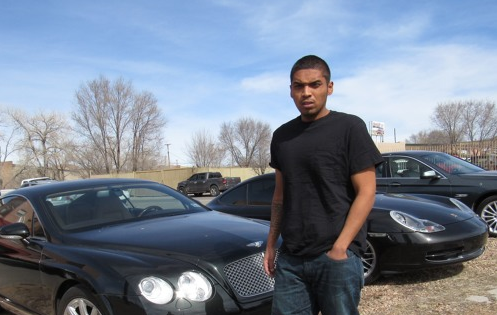 No Feelinz!!! Your latest mixtape was amazing!!  How long have you been rapping?  How did you get started?  And give us the story on how you came up with your MC name

I’ve been rapping since 2005 age 15.  As a kid growing up, life has been a struggle for me. Long story short, I started writing my feelings down in a notebook about the things I would see everyday. Over the years I ended up filling up over 7 notebooks with my thoughts, I still have the notebooks today. By 9th grade I dropped out of highschool to get my G.E.D and started working. I never wanted to be a rapper back when I was young, but I was always into making beats and hiphop music. I started out using free beats software, and would record my friends in my room off a cheap used mic. One day my mom kicked me out the house the only thing I had been a backpack full of clothes, laptop with a m.ic, and my notebooks I would write in. Well being homeless I showed a few of my friends and older people in the streets my writings and everybody liked what i wrote. so me and my 2 friends started recording songs together in different places that’s when I realized I wanted to rap. Music is a part of life for us who understand. I was a kid expressing my feelings at the time trying to stay positive in a negative environment. In 2005 I recorded My first mixtape and I’m still dropping mixtapes and music today..!

Once you cause so much pain, emotion, and stress on someone. They start to have less care and emotions, the pain ends up going away. The feeling for anything is gone. I came up with No Feelinz for my no sympathy on pitty stuff life is rough for some of us, while others complain about life.

How did you get into the whole Illuminati / Conscious niche of Rap?

I Like to call it “reality music” , I rap about what I see with my own eyes. Ever since I was a kid I’ve always felt like something here is not right, like the Public schools. That’s why i dropped out in 9th grade or turn the T.V on crazy stuff everyday people can’t handle the truth of reality, but now they call it Illuminati. We have been controlled for many years now think about it. By going to school working 9-5 for low pay. We follow trends instead of being ourselves at the end of the day. The system has a lot people looking like robots and all the creative aspects are all gone.There’s no more young leaders that’s what i see with my eyes so I’m going to rap about it. I’ve been talking like this since I was 12 years old all my friends and family always looked at me crazy. I just had an open mind about things or maybe i see different from most people.

Please breakdown the creative process of your latest mixtape “South West Bang 3”. Also tell us a bit about the dope mixtape cover? Is that you on the cover?

Yes that’s me on the cover. I linked up with “Filthy” back in 2011. This guy has some great artwork trust me.! He has done all my southwest bang mixtape covers vol 1 , 2 and 3 and we still work together to this day. this SWB 3 Mixtape Project. I wanted to highlight were im from what makes the state i come from different from others since we are located in the southwest region of the u.s. I titled the mixtape series Southwest Bang my creative process was easy!! I wanted to leak Information out that others will not talk about. Besides people around here in NM know about aliens, area 51, billy the kid, government testing on people, and sending people to space with spacex .

Who are your Hip Hop influences?

2pac you can hear the knowledge he was Rapping about. I try not to pay too much attention on other music artists. I try to stay foucs on myself as an artist now.

Any new projects in the works?

Yes! A lot more mixtapes and videos that I will be releasing in 2016 & 2017 along with items in my clothing line. I just released Brainwashed with lies mixtape 10/01/2016 Also I plan on dropping Southwest Bang 4 by next year. I have a few new singles on the way coming soon 1.dolla signs Feat mike jones and 2. trust no body along with a few new EP’s and more singles I can’t give dates yet on anything just yet..I’ve Been in the studio non-stop.! Grinding I feel well invested in myself & Career..!

I have performed a few live shows in the past. Nothing resent no shows lined up yet. I’m staying busy working hard on my craft along with the business aspect that comes with having a music career.

Healthy, doing good and still on my music grind.

Its like college ball vs pro ball. In college the players play their hearts out hoping to make it to the Pros, well it works the same way just with music. Now Underground Hip-Hop it’s hidden from the main urban scene, why does major record companies have limits and guide lines. Artists have to promote and sell other company’s products. What about the music?, so at the end of the day it’s called business NOT Hip-Hop..! along with underground hiphop there is no limit. We got many great artists with talent that showcase great creativity, pain, and story telling in their music.

Big shout out to the Lord, @UGHHB, Underground hiphop Music and all the people who showed love and support.!