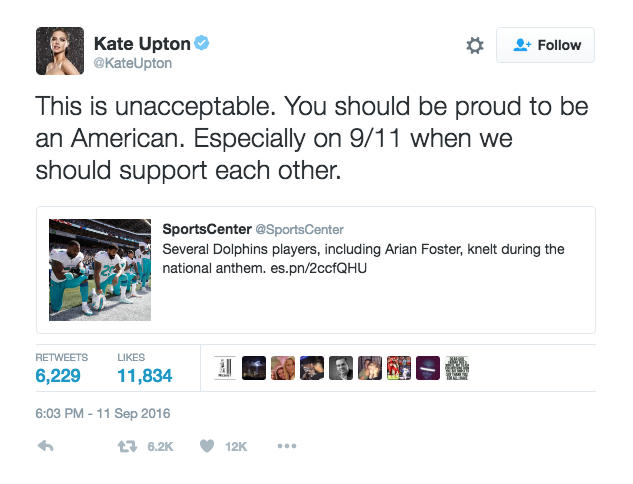 Kate Upton has been cancelled. The Sports Illustrated cover girl and supermodel took issue with Miami Dolphins players protesting by kneeling during the national anthem—the nerve.

“This is unacceptable. You should be proud to be an American. Especially on 9/11 when we should support each other,” she tweeted while sharing a Sports Center story about the Dolphins players

It didn’t get past anyone that Upton has never said a damn thing about Black people being wrongly killed by police—what Kaepernick’s protest, and those he’s inspired, is about—so the slander was immediate.

Also, protesting and expressing your beliefs, no matter if it’s the “right” time or not, is as American as it gets.

Peep the potent, acute and necessary slander below and on the following pages. Props to Black Thought and El-P for keep it classy, but sharp.

I'm lost. Did these guys say they weren't proud to be American? https://t.co/zmQJrPTcMJ

They sure do love some black athletes until they "get out of line," right Kate Upton? pic.twitter.com/DDLY76dLz2

Maybe you can be proud to be an American and also protest those things that you think aren't so great about America. https://t.co/klwSIB4DNR

Have a stadium full of seats, Kate. pic.twitter.com/ZlBoIgydBH

.@KateUpton not sure anyone was looking to you for permission to express anything, princess.