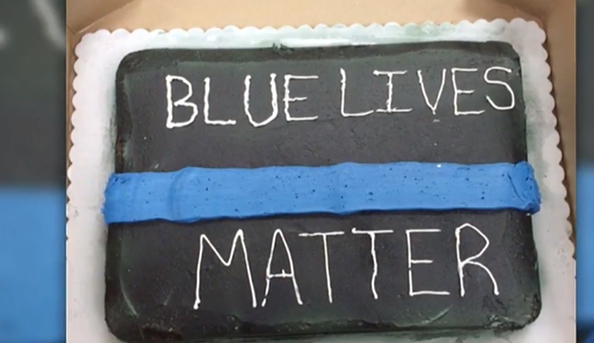 “Ain’t no cake, bih.” Three Walmart employees are in trouble after refusing to make a “Blue Lives Matter” cake for a woman celebrating her father’s retirement from the police force.

The three individuals work at a Walmart in McDonough, Ga. which sits about 30 south of Atlanta. Fox News reports that a woman came to the store to get the obviously offensive “Blue Lives Matter” cake made for a retirement party for her cop dad.

The three employees reportedly refused to make the cake and called the gesture “racist.” According to the woman ordering the cake, she says the employees said that they did not feel comfortable making the cake and asked her to go to another bakery.

A manager then got involved and offered to not only make the cake for her anyway, but also gave her a $50 gift certificate.  This was the result and woman and her ugly cake left the store.

“I was so shocked,” the unidentified woman tells Fox News columnist Todd Starnes. “I didn’t know what to do or say or anything. I was trying not to lose my temper or make a scene.”

The woman, who called the cake design “unprofessional” also left with an apology from the store to her and her family. Walmart issued a statement saying:

“Our goal is to always take care of customers. But, sometimes we misstep. We’re glad we were able to connect with the family to apologize and make this right.”

Fox News reports there have been calls for the employees to be fired.

Is the customer always right? What would you have done if you worked a bakery and a paying customer asked you to create such foolishness?