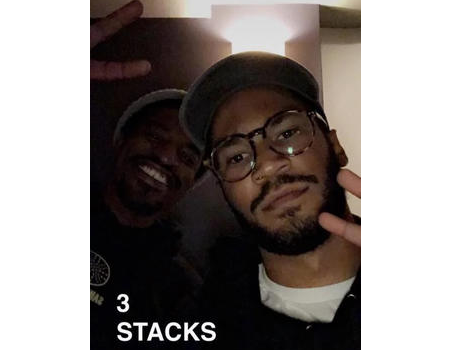 2016 is shaping up to be a very prolific year for Andre 3000. The elusive rapper was spotted in the studio with producer Kaytranada earlier this week.

Kaytranada just whetted the appetites of music lovers all over the globe when he posted a Snapchat photo of himself with 3 Stacks this past weekend. While the photo was taken at an undisclosed location, it is worth noting that Kaytranada was in Atlanta this past weekend as a headlining performer at the Milk & Cookies Festival.

Andre 3000 has been popping up on some of the most high-profile music projects of the year. His “Solo” verse on Frank Ocean‘s Blonde album rehashed “greatest ever” talks while his showing on Travis Scott’s “The Ends” from his Birds In The Trap Sing McKnight album has people thinking that he in the studio a lot more often these days.

It was also just revealed that he has two guest spots on Kid Cudi‘s upcoming album Passion, Pain & Demon Slayin.

As for Kaytranada, heads are continuing to wake up to Montreal-based producers mind-expanding debut album 99.9% and more are sure to follow with the release of the accompanying 0.001% mixtape.