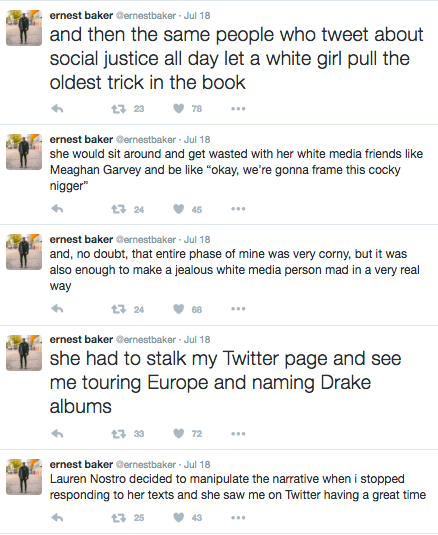 Last year, music journalist Ernest Baker was hit with assault charges by his ex-girlfriend Lauren Nostro, who was at the time an editor at Complex. After a lengthy hiatus off Twitter (some would call it an exile), Baker return to announce that the charges had been dropped, and make a spectacle.┬á

“The case against me was dismissed on Monday, June 27,” tweeted Baker, who not so coincidentally has a new book out called Black American Psycho, on Monday (July 18).

In a multitude of tweets over the course of two days, Baker went on to lay out how he found himself in a predicament that included recounting profuse drug use, accusing┬áNostro of rape, lamenting losing his $135,000 book deal because of his┬ástruggle and more. Screen captures of text messages, video and audio were also part of the sordid tale laid out for all, who actually care or were bored, to see.

Nostro has been radio silent on social media, and according to Page Six has lawyered up. We’re sure her attorney is no doubt screen capping all of Baker’s tweets for future reference, and prosecution.

Nostro did tell Jezebel that the charges against Baker were indeed dismissed and that the case was settled “privately.” If said settlement included any sort of non-disclosure agreement, Baker did not care.

Seriously, the document saying the charges were dismissed was probably enough considering the Twitter tirade makes all the concerned parties look funny in the light. The only winners here are the lawyers.