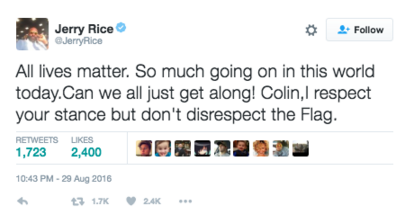 It seems that all it took was another unarmed Black man getting gunned down by police for Jerry Rice to change his attitude towards Colin Kaepernick and his national anthem protest.

The NFL Hall of Famer had people considering throwing his jerseys and football cards in the trash after he tweeted “All Lives Matter” in lieu of Kaepernick using his profile to draw attention to police murders.

Rice was appropriately dragged through Twitter for his remarks. But now, just weeks later Rice sounds like he is changing his tune.

I support @Kaepernick7 for bringing awareness for injustice !!!! As Americans we all have rights! Im hoping we all come together#solution

Rice’s change of heart comes after yet another unarmed Black man, this time Terence Crutcher, was gunned down by police for no good reason.

Rice hasn’t immediately been invited back to the cookout though. Right now his status is still pending. He may might get invited to the bar to watch the game, might.

@JerryRice @Kaepernick7 what changed after you dragged Kaep, did your car stall out last night