Exclusive: Go Behind the Scenes of Belly and KehlaniÔÇÖs ÔÇÿYouÔÇÖ Video 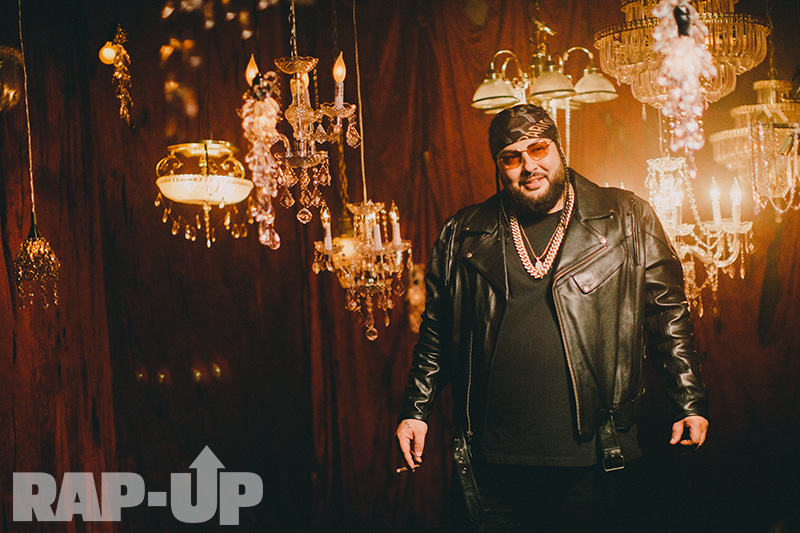 It’s dark and it’s hot. Smoke is in the air. Once the lights flicker on, chandeliers can be seen dangling around Belly. He stands at the heart of it all, rapping along to “You,” his Kehlani-assisted single off Another Day in Paradise. She’s standing beside him, smoke slowly escaping her lips. “Almost died,” he raps to the camera. “But it made us feel alive with each other.”

In between scenes, Belly keeps cool in his trailer, sheltered just enough from the Los Angeles heat. Dressed in all black, sporting shades, a leather jacket, and some ice, the XO spitter looks calm as he reflects on the visual he’s creating. “The video is not easy to explain,” he tells Rap-Up. “It’s abstract. It’s really a vibe. More than explaining what’s happening in the song word-for-word, the video captures the mood…How do you capture a feeling? How do you show a feeling? That’s what we chase every time we do a video.”

Working on “You” with Kehlani was a natural choice, he explains. In fact, that’s how a lot of his collaborations come about. “I work with my friends,” he says. “A lot of us came up [together]. Even guys like French [Montana]. I remember being around French when we were handing out mixtapes in Orlando and shit. [With] Kehlani, she was on her come up. I was just starting my little bubble and we connected just based on good vibes. I think it translated into the music.”

Another genuine connection lies in Belly’s relationship with The Weeknd. They’ve co-written songs like “Earned It” and Beyonc├®’s “6 Inch,” and teamed up on joints like “Might Not” (Belly’s highest-charting single to date at No. 68 on the Hot 100). That kind of track record comes from a close bond. “That’s my brother,” Belly says. “The chemistry shows. For me, it’s one of my most pivotal points, that he chose to include me into his world or his vision.”

Fans can expect more of that in the future, of course, but nothing is planned. That’s just how the XO brothers roll. “It’s never systematic with me and him,” explains Belly. “It’s always natural. I think the next time we collaborate, it’s gonna be something for the record books.”

Outside of Abel, Jay Z has also been a valuable mentor. “[From] the first conversation me and him had before I signed a deal, I learned so much from him about life,” says the Roc Nation MC. “Seeing somebody that has the world at his fingerprints and still remains so humble and cool…He invited me into his home, and as a man, that taught me a lot. Of course, as an artist, he’s somebody I idolized my whole life. I’d always sit down and write raps and pretend that he was watching. That’s real.

“Our relationship is dope,” he continues. “I sent him the project before it came out. He sent me back the quotes that he loved from the project. We keep up on that level. It’s incredible that he’s in the position that he’s in and still, guys like me can still reach out and touch him, and be able to have conversations. That’s what we should all want to embody one day. That’s the epitome of what the perfect rap career should really look like…It’s incredible. That’s probably the most surreal feeling in my life, to tell you the truth.”

So what’s next for Belly? Well, his intention is to drop an album and another project this year. He says he hasn’t thought about collaborations just yet, but he’s already lined up some bangers from a couple of high-powered producers.

“Pharrell gave me something so crazy for the album,” he beams. “It’s such an amazing vibe. He’s so incredible, man. He’s such a genius. He knows I like the dark shit, but he gave me something dark that people can still vibe to and get down to.

“Just as important as what he gave me musically is what he gave me in terms of the gems,” he adds. “When he would walk in the studio and just talk to us for five minutes, all of us would be like, ‘Damn, this is the coolest shit ever. Pharrell’s here just having real conversations with us, talking about life, and being the most humble dude ever.’ Shit like that makes the music so much cooler. When you do the music, it comes out so much crazier.”

DJ Mustard also delivered a beat that’s “so fire,” Belly says, noting that “he stepped out of his box a little bit” on it too. Along with Skateboard P, Mustard’s beat will only add to the album’s overall sound, which he repeatedly describes as “dark.”

ÔÇöWords and photos by Andres Tardio

Exclusive: Go Behind the Scenes of Belly and KehlaniÔÇÖs ÔÇÿYouÔÇÖ Video : Rap-Up