How Logic’s ‘Vinyl Days’ Embodies His Best and Worst Qualities Logic has released his seventh studio album Vinyl Days.  A ponderous, 30-track volume, this newest offering might not be his most approachable work, but it is his most honest. Released on June 17, Vinyl Days is chalk-full of golden-age beats and the Maryland Artist’s intricate, tenacious style.

Ripe with notable features, and references to his split with Def Jam, Logic asks a lot from his audience.  He often comes across as self-important and overly thirsty for recognition.  But this comes with an understanding that fans have been through twists and turns following the Maryland Rapper’s career. 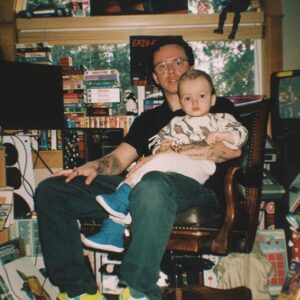 One element about Logic is undeniable: the man can rap.  His technical prowess, breath control, and flow have long-since separated him from many of the elite rappers in the game. Early Logic records take listeners back to the mixtape era, where he thrived through the ‘Young Sinatra’ series.  In a lot of ways, his early career paralleled Mac Miller’s.

The next era was Logic at his best: punchline heavy, complex rhyming, and charismatic in his storytelling. Some of his best songs explored powerful aspects of identity. These include his mixed-race upbringing, growing up in poverty, and his father’s drug addiction.  All told over boom-bap beats.

Unfortunately, the second half of Logic’s career isolated many fans and followers who fell in love with the soulful Rubik’s Cube solving version of the rapper. Signing with Def Jam in 2013, Logic’s discography began juggling scorching rays of his former self clouded by mainstream offerings.  He also began to champion mental health issues. (Certainly a noble cause), but did so with a style that came off as preachy, inauthentic and attention-grabbing.

Based on his background, upbringing, and mixed reviews, it’s no wonder that Logic’s feelings of isolation resound in his music. When he uses these feelings as fuel, he is at his very best.  When he complains about them, he becomes hard to listen to.

Vinyl Days represents when these two sides of Logic converge in one, massive, feature-ridden project.  Logic’s technical abilities and songwriting never skip a beat. However, project length, cohesiveness, and the aforementioned conflict in messages weigh the project down.

It’s much easier to cope with a 30 track album by breaking it into two parts.  The project title almost urges a listener to do so.  Vinyl Days naturally morphs itself close to halfway through, and saves many of its biggest features for the second half.

Largely produced by Logic and longtime producer 6ix, Vinyl Days is laden with 8 voicemail skits including ones from Anthony Fantano, Earl Sweatshirt, J.J. Abrams and Lena Waithe. It also weaves in appearances throughout by Funkmaster Flex. While this lends mixtape era nostalgia, it creates a damaging sense of self-importance.

The opening track Danger includes a forward by Morgan Freeman, and an outro by Flex, both of which instantly introduce uncomfortable bravado to the project.  It is as if Logic doesn’t trust his talent speak for itself; he needs to employ notable outside forces to declare to his listeners that he is the GOAT.  Tracks like Tetris, In my lifetime, and Decades however, see Logic return to the “good Logic”, rattling of ridiculous, complex rhymes and punchy bars.  Action Bronson appears as the first notable feature on In my lifetime.

BLACKWHITEBOY is one of the more interesting examples of Logic grappling with his strengths and weaknesses over the course of one song.  He addresses his “retirement”, and the refrains of “hate” that he has received from fans.  His bars even admit the fact that at a point he sold out for money, “Made fifty million when I went pop/But everybody know when Logic pick up the mic, bars drop.” This self awareness is endearing, but Bobby sours it through bars in the second verse: “They less focused on the talent and more focused on the upvotes/One album I’m the champ, then the next I’m the villain/Do the thing we like, or else it’s fuck you and your feelings/I was spread thin, just about ready to let the lead in.”

The contradiction here is clear. Logic professes he sold out at points in his career, and then shows anger and points blame at fans and media for calling him out on it.  He’s critical of an industry that is after the ‘upvotes’, when he was chasing the same thing.  These contradictions loom large throughout Vinyl Days.

Quasi sees Logic putting himself in the shoes of Madlib and his rapping alter-ego quite effectively, and Bleed It is an effective ode to the Beastie Boys.  Sampling So Whatcha Want and Ch-Check It Out while addressing issues of childhood trauma is more like the Under Pressure Logic that fans cherished.  The subtle distortion on his vocals is a great touch here.

Logic shares more about his rocky relationship with music critic Anthony Fantano on LaDonda, painting a vivid picture of how the relationship shifted.  “I used to hate you ’cause you shit on my music/But now we homies, I take your criticism and use it/I used to fantasize about murdering you/Choking you to death and watching from your point of view ’til we got friendly/And I realized you wasn’t ever tryna end me.”  Again, this is good Logic. The human one.  Relationships change, and he is able to encapsulate that in just over two minutes.

Logic sprinkles in some strong features in the late first half of the album, employing the talents of Curren$y on Clouds and Russ on Therapy Music, the latter being one of the more memorable songs of the “A-Side”. The second half of the record is more free flowing, lighthearted, and feature heavy.  It is the Logic I hooked up my monitors for, and solidifies Vinyl Days status as a successful body of work.

Wiz Khalifa joins the fray on Breath Control, and kick starts a flurry of eclectic and talented features.  Blogger Nardwuar is sampled on the track named in his honor, and then the floodgates open from a feature perspective. Kickstyle reunites Logic with his Ratt Pack running mates Shy Grey, Big Lenbo and IamJMARS.  Royce da 5’9” adds his talent to the forceful track Ten Years and Portaone sees RZA join Logic over a Bring Da Ruckus sampled beat.

Two of Vinyl Day’s strongest tracks come near the end of the project. Orville employs the underrated talents of Exile and Blu, which sees the trio exchange iron-clad verses proclaiming their dominance over the rap game.  And the title track, featuring DJ Premier’s legendary chops is a superb offering. “Rose through depression like a rose, I was destined/Your boy reach his goals like D-Rose with the left hand/When life takes a toll, I suppose it’s a lesson/Question, how you woke but you slept in?” This style of technical, multisyllabic rhyming is what has endeared Logic to fans for over a decade.  His immense talents are only supplemented by the unparalleled talents of guest producer Premo.

Track 29 (yes you read that right), features the game, and the project’s finale Sayonara serves as a thank you, but F you to Def Jam.  Ending on a note of bitterness seems appropriate.  It characterizes Vinyl Days shortcomings to a tee.

Logic is at his very best on this project when rapping freely. When he shows no resentment toward the perceived disrespect he’s experienced from the industry, the media, or his fans.  When he dwells on these attacks, or his perception, his lyrics noticeably come up short.

Vinyl Days is a microcosm of Logic’s career in that way.  It is just like a Rubik’s Cube; containing all the right pieces to arrange a perfect whole, but seemingly impossible to do so.