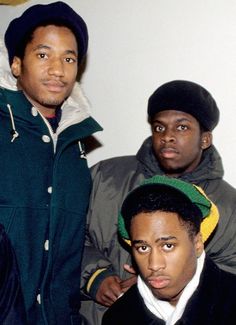 Jarobi White, co-founder of A Tribe Called Quest says the grind of traveling and recording their final album is what led to Phife Dawg’s death.

With A Tribe Called Quest‘s final album set to drop next Friday, Hip-Hop fans are coming to grips with the fact that this will no doubt be the last time we hear from the group as a whole. In addition to, these are probably the last days of us hearing from the group as a unit in interviews as well. Which is what makes Tourè’s profile on them for The New York Times a must-read.

There are plenty of gems in the story. One, we learn that every contributor, including heavyweights like Kendrick Lamar, Andre 3000, Busta Rhymes and Jack White had to come to Q-Tip’s studio to record their verses in person.

“If you wrote your rhyme somewhere else, you still had to come back and lay your verse in Q-Tip’s house,” Busta says in the piece. “So we pretty much did every song together. Everybody wrote his stuff in front of everybody. Everybody spat their rhymes in front of each other. We were throwing ideas around together.”

The time spent creating and recording around each other also allowed for Q-Tip and Phife to hash out their personal differences that had built up over the last almost 20 years. With the record-in-person rule in place, Phife literally went the extra mile and started flying across the country from his current spot in Oakland over to New Jersey to record at Q-Tip’s home studio. To make the process a little easier, Phife would stay at Tip’s for weeks at a time and found a nearby dialysis center to get treatment for his diabetes.

ATCQ began working on the album after their December 2015 reunion performance on The Tonight Show with Jimmy Fallon. They recorded all the way up to when Phife died unexpectedly this past March. In the aftermath, it seems that those three months took a toll on Phife’s fragile health.

It was thrilling to the guys to watch stars like Jack White, Mr. Lamar and André 3000 come through and record. It was even more exciting to have their brother Phife around all the time. But now some of the group members think that all that traveling may have contributed to grinding him down, physically. “Doing this album killed him,” Jarobi White said simply. “And he was very happy to go out like that.”

In the months since Phife died, Q-Tip has worked to finish what he called “the final Tribe album.” Its title is the one Phife wanted. What does it mean? “I don’t know,” Q-Tip said. “We’re just going with it because he liked it.”

Q-Tip said it was tough to finish the album. From April until late October, he recorded and tweaked his way to the end, but one part was never easy. “It’s so hard for me to sit in there and hear his voice,” Q-Tip said. “Sometimes I just have to like take a break and walk away. It gets heavy. It doesn’t necessarily get sad, it just gets heavy. I literally feel the energy from him when I hear his voice.”

Tribe’s final album, We Got It From Here, Thank You For Your Service drops on Friday, Nov. 11.