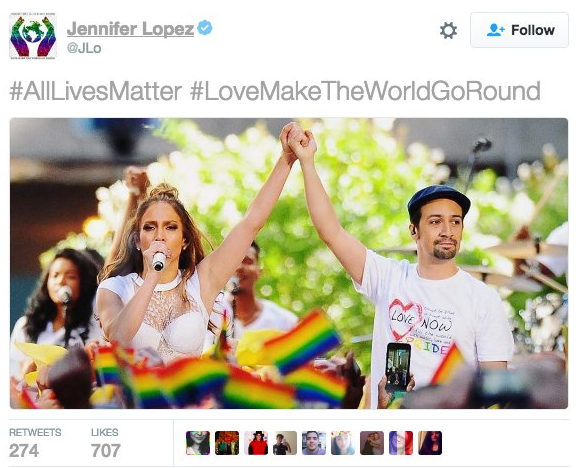 We’re pretty sure Jenny hasn’t even┬ábeen back to the block in eons — her pop-up hangout sessions with French notwithstanding.┬áStill,┬áJ Lo’s┬ámost recent actions have us thinking maybe she’s farther from the hood than we thought.

On Tuesday (July 12), the singer tweeted out “#LoveMakesTheWorldGoRound #AllLivesMatter.” Then, a few minutes later she deleted it, no doubt realizing perhaps that wasn’t the best stance to take. You know, being a Boricua from the block and all.

Talk about going Hollywood. The Internet is cold and heartless┬áthough, so the screenshot has been circulating and folks have been responding.

According to Page Six, a source close to the situation believes that J Lo wan’t thinking when she sent the tweet.┬áÔÇ£Honestly, she didnÔÇÖt┬árealize the implications of the hashtag. Once she did she took the┬ápost down.ÔÇØ

What’s also a bit unnerving is the fact that Lopez is currently promoting her new track “Love Makes the World Go Round,” so she hashtagged the song and undercut the #BlackLivesMatter movement in a single tweet.

The song is cool, positive even. Lopez performed the track with Lin-Manuel Miranda┬áon the Monday taping of the Today show. Fifty of the Orlando shooting survivors and their families were in attendance.

The record┬áwill also benefit┬áthe Hispanic FederationÔÇÖs Proyecto Somos Orlando initiative — but J Lo is kinda wack for this one. Put her on the list with Fetty Wap referencing #AllLivesMatter and defending it by reminding us that his kids are of mixed race.

Maxwell tried it last week, too. After the Dallas police shootings, he tweeted #HumanLivesMatter and #AmericanLivesMatter but at least he had enough sense to tag #BlackLivesMatter in a later tweet.