Kevin Durant On Russell Westbrook: “We’re Going To Handle Some Stuff As Men” 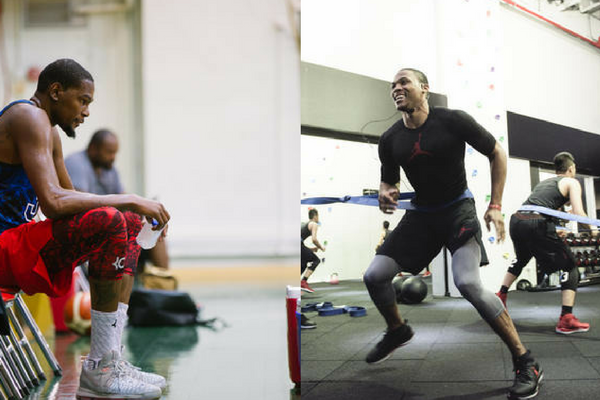 The Golden State Warriors and the Oklahoma City Thunder face each other on the court this Thursday, Nov. 3. So of course, the storyline is Kevin Durant, who jumped ship, versus Russell Westbrook, the loyal soldier who has been wronged.

Much has been said, written and discussed about KD’s departure from OKC.

But no matter if you’re Team Westbrook or Team Durant on the matter, the fact is that the former found out that his longtime teammate was leaving via a text. In an interview with The Mercury News, Durant copped to this, but nevertheless says he still considers Westbrook a friend and that the two of them will discuss their issues, as men.

“I don’t have nothing against Russell. As I shouldn’t,” KD told the Mercury News. “And I don’t think he have nothing against me. I don’t think he’s taking shots at me. I don’t think he’s doing anything that everyone is putting out there. It’s for your entertainment, your pleasure, your joy. I see it all the time. They want us to beef because of the game on Thursday. They want more suspense and excitement when they turn the TV on at 7:30 or 10:30 or wherever you are. That’s what they want. But I’m not letting that get between us. Yeah, we’re going to handle some stuff as men behind closed doors. That’s how you’re supposed to do it. I’ve never said I was right about everything. Never said that. But we’ll handle that.”

KD also refuted the writer’s angle in his recent Rolling Stone cover story that the pair were just “work friends” and put his finger on the pulse of the alleged rift between he and Westbrook.

The post Kevin Durant On Russell Westbrook: “We’re Going To Handle Some Stuff As Men” appeared first on Hip-Hop Wired.