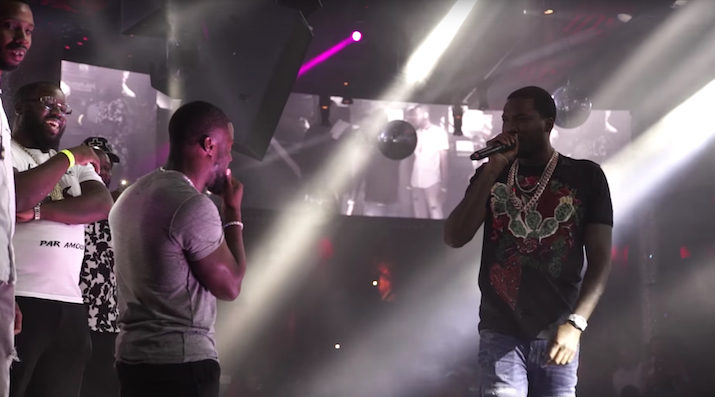 Kevin Hart is a fool. We can all agree on this, yes?

On Sunday (September 4), the actor/comedian stopped over at Drais Nightclub in Las Vegas for the evening, sharing the spotlight with Meek Mill who was also in town for the night with his Dreamchasers squad.

It wasn’t long before the two were going head-to-head on stage. Meek had a couple bars about Hart’s eyes betraying an MDMA indulgence. Then Chocolate Droppa got on the mic.

“I’m ’bout to show my n*gga Meek what fiend look like… Y’all want Droppa, I’ma give you Droppa…”

We won’t give it all away but Chocolate Droppa goes in on the Philly rapper’s pants and kicks before being distracted by a member of his crew, whose only transgression was standing there onstage.

“Hey, go to the back! This n*gga in the front like he got on the best outfit in the crew… Ay. A piece of me wanna f*ck up every n*gga in your crew but I shouldn’t do it on this stage…” Then Hart proceeded to send one more hilarious shot towards another member of the clique.

The Let Me Explain comedian said, “This is all love, man,” ending with, “I stand by my guy, when I say that I mean I stand by my guy’s talent. I separate the bullsh*t from the talent. If y’all don’t respect nothing else, respect my n*gga’s talent. Meek Mill is official and has the talent. He gets it done. I’m a fan forever. I’m a Philadelphia guy forever, I’m going to ride with Meek forever.”

Hit the jump to watch Droppa and Meek’s Vegas battle.