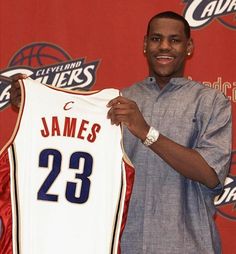 LeBron James will be standing during the singing of the national anthem at NBA games. However, h’se still all for supporting Colin Kaepernick’s form of peaceful protest, and also spoke on his fear of his son eventually being able to drive a car, and what can happen if he is pulled over.

Today was the NBA’s media day and King James carefully answered when asked about Kaepernick.

“I’m all in favor of anyone, athlete or non-athlete being able to express what they believe in a peaceful manner, and that’s exactly what Colin Kaepernick is doing and I respect,” said James, who reminded reporters that he’s passionate of what he believes in and speaks on it.”

He added, “Me standing for the national anthem is something I will do. That’s who I am, that’s what I believe ,” said James. But that doesn’t mean I don’t respect (or) don’t agree with what Colin Kaepernick is doing.”

We can respect that. After all, protesting, no matter the side, is everyone’s right, right?

LeBron James ALSO spoke about fearing for his son, who is 4 years removed from driving and what can happen if he’s pulled over.

“My personal feelings is that I got a 12-year-old son…I look at my son being four years removed from driving his own car. Being able to leave the house on his own. And it’s a scary thought right now to think if my son gets pulled over…and you tell your kids if you just listen to the police that they will be respectful and things will work itself out. And you see these videos that continue to come out, it’s a scary ass situation. That if my son calls me and says he’s been pulled over that I’m not that confident that things are going to go well and my son is going to return home.”

And no he didn’t say all cops are bad.

And, for those thinking LeBron James put on some tap dance shoes and hopped on the “All Lives Matter” struggle train, please listen to the entire quote.