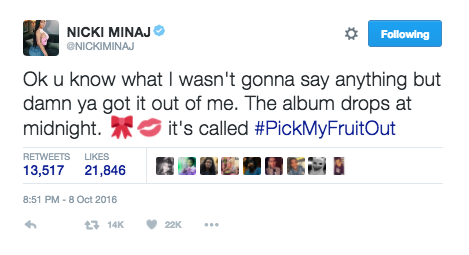 Nicki Minaj was on her troll game hard last night (Oct. 8). The Queens rapper told fans she was dropping a fruit-themed album at midnight called #PickMyFruit, that turned out to be faker than…let’s not go there.

“Ok u know what I wasn’t gonna say anything but damn ya got it out of me. The album drops at midnight,” tweeted  Minaj.

She even followed up with a tracklist that featured songs like “Mango,” “Raspberry” and “Fruit Loops.”

#PickMyFruitOut even started trending, but the jig was sky high.