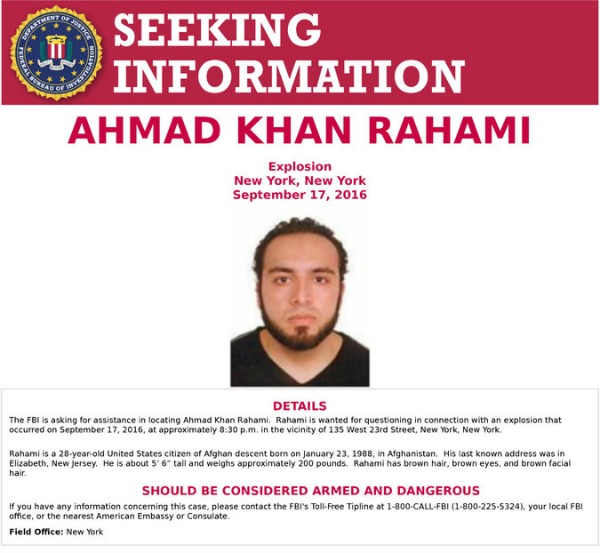 Ahmad Khan Rahami, a 28-year-old naturalized citizen of Afghan descent, is wanted for questioning in regards to a harrowing bombing event that took place in Manhattan over the weekend. While Mr. Rahami is not considered a suspect at the moment, local and federal authorities appear to have found credible reason to bring him in.

As reported by the New York Times, the bombing occurred this past Saturday evening and sent waves of terror throughout New York and nationwide. Dozens were injured by the initial bombing in the busy borough’s Chelsea section and investigators discovered a second explosive device just blocks away. Mayor Bill de Blasio offered a grim warning to New York residents and warned that Rahami could be armed and dangerous.

Why police are looking for Rahami has not been formally announced, but Mayor de Blasio said Monday morning that finding him was a top priority. City and state leaders have been reluctant to call the bombing an act of terrorism but Gov. Andrew Cuomo has since conceded that there might be some involvement from outside terrorist organizations.

According to a tip given to the Times, Rahami, a resident of Elizabeth, N.J., is wanted for questioning not only for the Manhattan bombing but also an explosion at the Jersey Shore. Officials say five pipe bombs were found at an Elizabeth train station and have a potential link to Rahami.

Below, the FBI has issued a printout featuring information on Rahami and how to alert authorities if encountered.