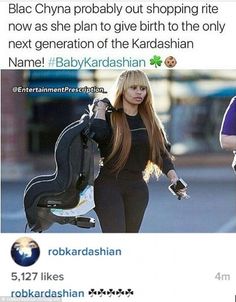 Rob Kardashian plays no games about his soon-to-be wife Blac Chyna. Last night the youngest Kardashian — and the sole boy of the family — showed his sisters that he could get on their level and be just as petty when he posted Kylie Jenner’s phone number on Twitter.

What provoked this devilish move you ask? Welp. According to Rob, it looks like they planned a surprise baby shower event and the baby’s mom wasn’t invited.

Now. What kind of sense does that make?

They all have been hard on Chyna and it seems to have reached its peak with Rob. Can’t blame him.

And in case you’re thinking Blac Chyna somehow got her hands on Rob’s phone. Nah. It’s him tweeting.

“Didn’t invite the mother of my child to a baby shower you all were trying to throw for me? You all must have lost your damn minds…”

Then, when one overzealous fan called Kardashian a loser in regards to these actions. He responded with venom: “I’m a loser cuz I stand up for my woman and want her to be included in my FIRST baby shower ever and enjoy the moments of b eing a firstg time dad??? Shut the f*ck up hoe.” Oh. Are we wrong to chuckle?

All things considered, if we had to point fingers at who should actually be shunned in that whole Calabasas circus, it would be Tyga’s thirsty ass for creating this mess years ago when he picked up with Kylie. SMH.

Of all the girls in the world, you choose the little sister of your baby mother’s BFF? Jerk.