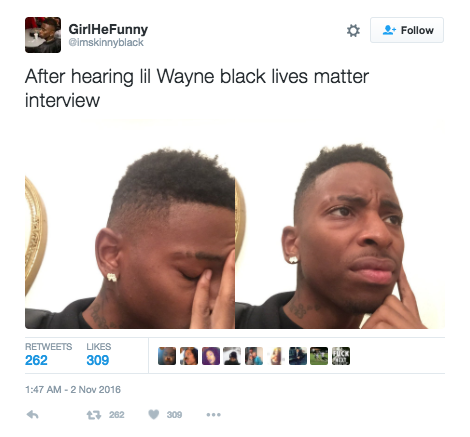 Lil Wayne was asked a simple question about Black Lives Matter, and things got weird. Renowned reporter Linsey Davis simply asked for his thoughts on the BLM movement during an interview on Nightline, and Weezy’s rambling and aggressive answer has sent Twitter into a fury.

Weezy acted confused about the question and the gist of his answer was he makes too much money to have such trivial narratives like Black Lives Matter affect him. Twitter almost immediately called for Tunechi’s cancellation, while being sure to drag him along the way.

However, there are plenty of people still riding for Tunechi. Okay, maybe not really, but some.

He's right, but now watch the outrage mob try to destroy his career over an opinion. pic.twitter.com/A3W2mhrpjr

Most, though, are over Lil Wayne’s antics. See for yourself below and on the flip.