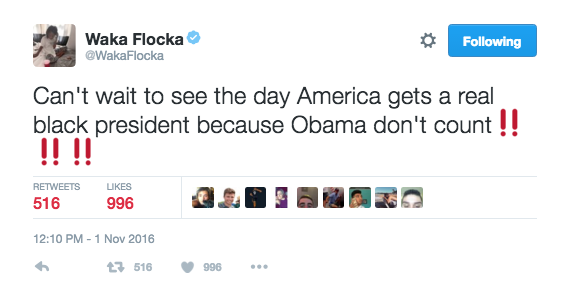 Waka Flocka offered his opinion on whether or not President Obama really counts as being the first Black President of the United States of America.

Let that sink in.

Sure, people like Diddy feels that Obama “shortchanged” Black people. They are entitled to that opinion. But, last time we checked, President Obama was as Black as the sky is blue.

He tried to explain what he meant, though.

Nah, still confused. Waka is out here sounding like he’s one part #AllLivesMatter and one part Obama Birther, or in this case, “Obama Blacker.” But, even with his explanation, it proved to be too late. The Twitter savages attacked immediately. So gather around children, there is a roast to be had. Bring marshmallows.

@WakaFlocka Had to use your own gif on you for this stupidity. pic.twitter.com/TwoJ5lcIaw