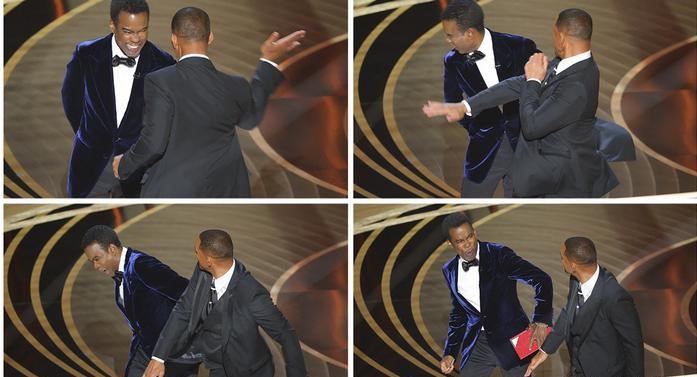 Last night at the Oscars, in one of live televisions most jaw dropping moments, Will Smith struck Chris Rock with one of the slaps heard ‘round the world.  Smith’s act was in response to insensitive remarks Rock made regarding Jada Pinkett-Smith’s lack of hair, which is caused by a medical condition known as Alopecia.

While social media, meme-makers and the world at large were abuzz, the moment got us thinking about our favorite bangers of the year so far.  Here are our top four slaps of early 2022.

Benny the Butcher hosted J.Cole on lead single Johnny P’s Caddy from Tana Talk 4. Cole came hard as ever, over a heady boom bap beat, questioning the truthfulness of rappers who constantly spit about guns and drugs: (“Around the outlines of chalk where the corpses lying/of course I’m trying to revive a sport that’s dying/but the guns and the drug bars that why all relying/got these nerds thinking that you N*ggas hard as I am.”)

Benny added his own high energy and aggressive lyricism, giving the track real playback value. This one slaps!

The initial single from Earthgang’s powerful 2022 album Ghetto Gods, American Horror Story is an instant classic.  The track is an anthem, putting great emphasis on black independence and liberation.  Over the groovy, undulating production of Natra Average, Johnny Venus (Olu) strikes an unbelievable initial chord [“Once upon a time across the far and wide/blue abyss, the first people known to Earth thrived/Then one day a ship docked with evil intentions/That would change the course of the world and shape our lives.”]   Olu’s verse goes on to describe, in vivid detail, the struggle of his ancestry, and the relationship of the police with his hood, much of what is echoed by Doctur Dot’s rapid paced verse.

American Horror Story is bolstered by its elements of musicality, exquisite layering, ambience, and haunting darkness.  The West Atlanta duo just dropped a music video for the track last week.

Saba’s, Few Good Things is our early choice for album of the year. Survivor’s Guilt is the project’s banger, a rough, unfiltered manifestation of anguish. Saba’s staccato flow and wrought iron delivery hits home: (“We facin’ the pressure of family that we watched suffer/I gotta lift ’em up out of the gutter/I make a check and send that to my mother/They root for me like Ireland and Conor McGregor”). Even with a more rampant voice, Saba’s thoughtfulness and internal rift are clear. Produced by Daoud and daedaePivot, the instrumental builds with 808 thumping tenacity.

This joint has been on our workout playlists since it dropped in early January. Play this joint loud!  JID is an absolute master when it comes to delivery and flow, and that rubs off.  Every artist who hops on a track with him elevates their game, and the same can be said for 21 Savage.  With a Mos Def flip, this instrumental is heat too, and the switch up on the second half gives JID a perfect platform to display all the elements of his lyrical prowess.